The Singapore recruitment market remains quite stable if not exactly in boom mode. The national unemployment rate sits at 2.1% largely consists of frictional and structural elements. There is essentially zero unemployment amongst educated professionals. Indeed a city of five and a half a million people which continues to advance as the leading base for regional headquarters of multinationals in both APAC and SEA, often struggles to provide all of the professionals required to staff these entities. This, notwithstanding the heroic efforts of the Singapore Government to meet these challenges. This should come as no surprise. All major international centres including New York, London and Hong Kong face similar challenges. Really it is a great problem to have.

So basically the overall situation remains much as described in our “Singapore Market Update Q2 2016”.

The outlook in our view remains moderately rosy.

China remains subdued but essentially stable at least in the short run.

Likewise Japan’s Prime Minster Abe has been in power for nearly four years and this is bringing at least some increased continuity to the country.

The US looks fairly sound particularly if one were to judge by recent records in the equities markets. Europe (ignoring Brexit) looks no worse than usual.

India, for all of its challenges continues to quickly advance. Obviously huge potential underwritten by promising (or challenging?) demographics.

Closer to home, SEA is doing quite reasonably, with positive outlooks for both the Philippines (new government) and Indonesia.

Obviously it will be very helpful to get past November and the US Presidential elections. For the first time in decades, the two leading candidates have quite different views on trade. Naturally this uncertainty is not good for investment.

In summary, pretty much business as usual, which amounts to saying that the market for high quality, internationally experienced, local nationals (in particular) remains highly competitive.

Let’s look in some more detail at Banking & Financial Services.

Risk & Compliance
That Compliance is the way of life for banking is nothing new. It is said that up to half of a banker’s job today is regulatory compliance related. It is an irony in modern banking that a banker whose original job description is to bring in business is strangely made to work just as hard trying not to onboard the business.

The more complex the client’s web of legal structures, the more corporate sleuthing the banker is expected to perform. The suspicion levied on corporate clients is now treated at the same level as secretive private banking clients to clear KYC procedures.

And the banks are paying a lot of pay premium for a compliance officer just to say ‘No’. Officers have little incentive to stick their necks out for anything that is not otherwise expressively permissible in black and white, not when regulators from Singapore to Switzerland have only recently exercised their privilege to shut down a bank mired in a high profile international money laundering scandal.

In risk management, banks have also accepted that when it comes to managing risk, it is no longer a matter of whether a catastrophic incident will happen but rather ‘when’ and ‘how’. The impetus is further exacerbated by the audacious Bangladesh Bank heist earlier in the year where hackers had expertly introduced the same malware allegedly seen in the high profile Sony back in 2014.

As a result, human capital intervention is no longer centred on risk ‘prevention’ but on ‘detection’, such as in the areas of fraud and forensics. Whether to look at whistle blowing cases related to questionable internal transactions, or clients and third party agents attempting to outsmart their bankers illegally. Either way the banks want to be seen catching the crooks, external and internal ones, before the regulators have a chance to impose their presence.

Organisational charts are also evolving to create a safe reporting line for this new team who are usually hired from law enforcement agencies. Such is the level of trust in banking these days that the CEO may conclude that the only way to ensure independence is to have this team report directly into the CEO’s office. 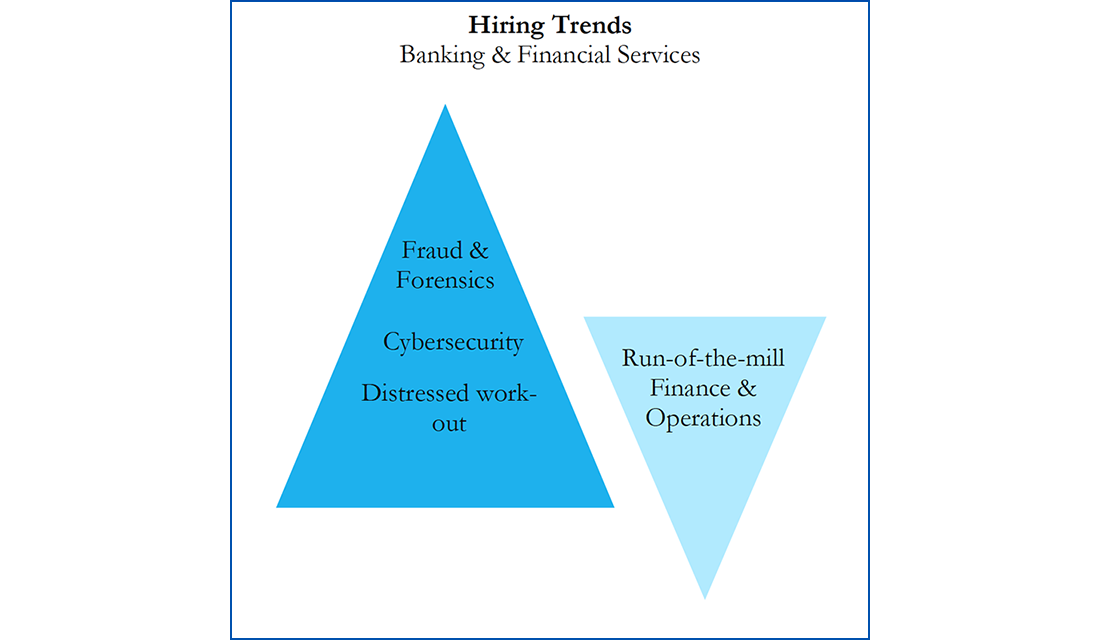 Back Office
Amongst other attributes, it is generally acknowledged that the Singapore banking system grew on the back of a strong pool of highly educated finance and operations professionals. Unfortunately neither function is currently hiring in numbers. But of course the usual bell curve between the ‘haves-and-have-nots’ still exist, and pay premiums are still necessary to attract the higher performing candidates; it is an otherwise unexciting job market for run-of-the-mill back office professionals. Many have therefore chosen to move from a ‘maker-and-checker’ function to a business-facing or risk-and-controls related one, in a bid to remake their work experience and increase their employability in the future.

Front Office
With proprietary P&L outlawed in banking, the only way banks can sensibly make money is when they actually show value or make money for their clients, which is challenging against the backdrop of stringent capital rules, a tepid global economy (now digesting the uncertainty caused by Brexit), where corporations and consumers are holding back from investment and consumption. There is therefore less need for bankers to do account servicing over clients who are generally underwhelmed on banking needs. On the other hand, there are certain pockets of corporate finance, private equity, and areas related to distressed work-out which are expanding in this environment.

Technology
Against a generally cautious backdrop, technology related spend seems stable. In 2015 technology as a sector topped the M&A deal list for the first time in Singapore, this was followed this year by Alibaba’s USD1b investment into a four year old locally based Lazada, making it the country’s largest inbound technology acquisition. Apple Pay and Samsung Pay have also joined the fray in H1 2016. All of these new players force banks to build products and platforms to stay relevant to a new generation of tech savvy clients.

While technology is an enabler to improve lives, banks also see technology as a means of ultimately reducing cost, as already evidenced by HSBC’s announcement to close down half of its branches in India in a push for digital banking.

So while technology can create jobs, it can and will take them away from you too – just make sure you are confident of which side of the fence you are on when that day arrives.